Pellet injection is a widely used technique to fuel the plasma core of stellarator devices. When cryogenic pellets are injected into the plasma, density and temperature profiles are abruptly, but transiently, modified. Consequently the radial electric field, which is set by ambipolarity of the neoclassical fluxes (which depend on density and temperature profiles), changes. This could affect, among other things, impurity concentration in the plasma, something that could be harmful for the performance of the stellarator.

In this work we analyse changes in the radial electric field immediately after pellet injection for both Electron Cyclotron Resonance Heated (ECRH) and Neutral Beam Injection (NBI) heated plasmas, by making use of the heavy ion beam probe and the Doppler reflectometer installed in the TJ-II stellarator. Also, the experimental results are compared with the radial electric field predicted by neoclassical theory. The neoclassical Er is computed by solving the drift kinetic equation in two ways: analytically, using the plateau regime approximation, and numerically, using DKES (Drift Kinetic Equation Solver). Additionally, the effect of pellet injection on impurity accumulation is studied by estimating the effective ion charge from X-rays measurements.

In ECRH plasmas the positive radial electric field reduces across the entire radial profile after pellet injection, assuming less positive values in the plasma core and having a transition to the ion-root for ρ > 0.4. Conversely, in NBI plasmas the negative radial electric field remains in the ion-root, even after pellet injection, assuming values closer to zero (less negative) in the plasma core region. 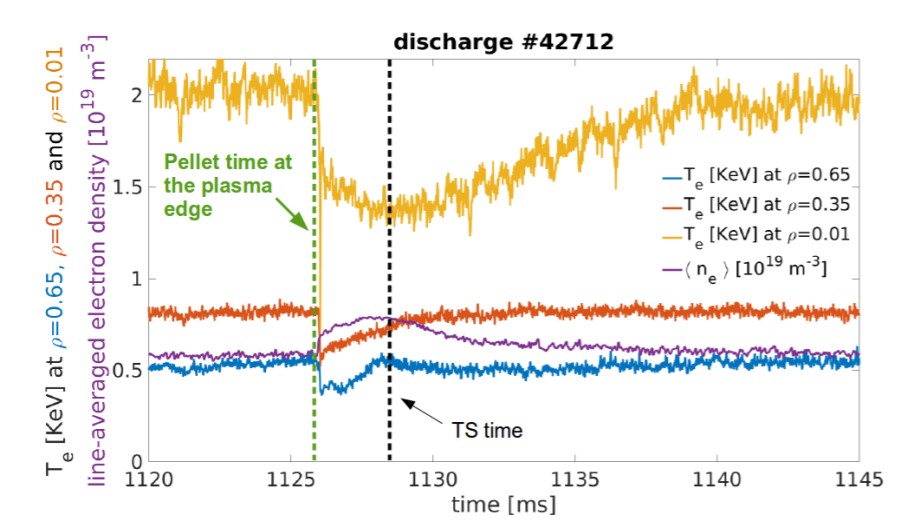