I am an energy engineer from University of Rome “Tor Vergata” and during my Master’s degree I was really impressed by unconventional and renewables energy sources, especially fusion energy. I think that challenges are the engines that move the world and fusion energy is one of the biggest that human being has ever faced. For my Master’s thesis I spent 4 months at Culham Centre for Fusion Energy (CCFE), where I studied the dynamics of the filamentary structures moving across the Scrape Off Layer in MAST.

Filaments (often called “blobs”) are coherent and magnetic field aligned plasma structures which are significantly denser than the surrounding background and highly localized in the directions perpendicular to the equilibrium magnetic field B.

I really enjoyed this experience and it was absolutely amazing.

Regarding plasma-surface interactions, it has become clear that radial transport is dominated by their radial outwards motion. They enhance plasma interaction with the surrounding material boundaries carrying a large fraction of the particles. Understanding the dynamics of these filaments is of crucial importance to

In the last decades several techniques have been tested to understand filaments motion in order to predict and quantify the amount of heat flux they carry onto the divertor. One of the most promising is direct imaging using fast cameras installed in MAST, as they can observe full 3D structure of filaments, measure over large region of plasma and they are passive, i.e. can always be collecting data. From these images it is possible to reconstruct 2D colormaps of light emission using the ELZAR algorithm developed by Tom Farley et al. at CCFE. In these colormaps is possible to identify brighter (hence denser) regions where filaments are more likely localised.

Text continues below the photo. 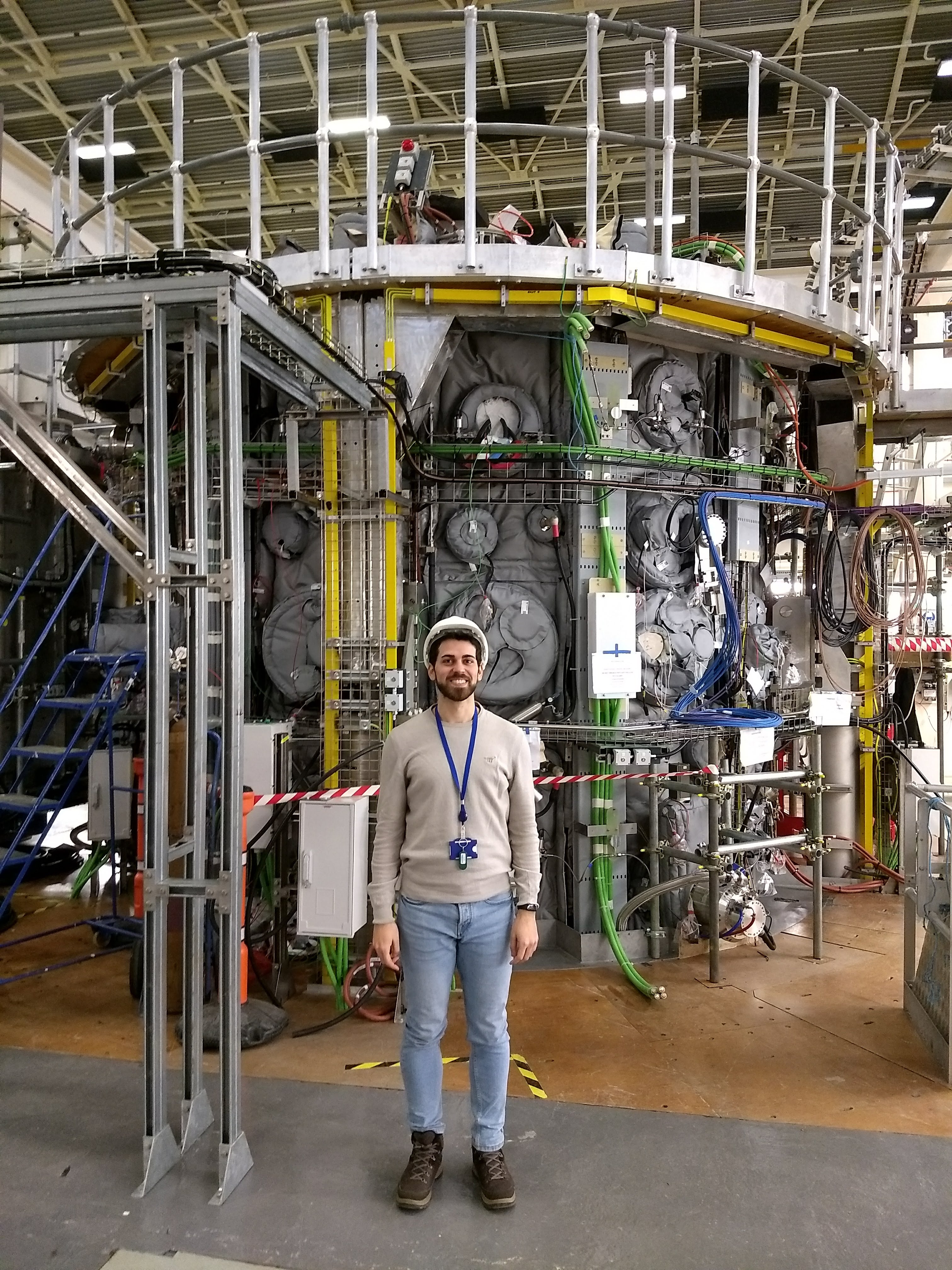 The purpose of my thesis was to develop a tracking algorithm to follow these structures over consecutive frames and see how they move outwards investigating their velocity and acceleration as function of: position, shape, light intensity and size.

Analysing data for over 4000 frames several interesting things came out:

I really enjoyed this experience and it was absolutely amazing. Living in a multicultural and historic city as Oxford is wonderful. What I enjoyed most was the collaboration between people at CCFE, no one is left behind and if you need help you will find it somewhere. That’s what I think research is meant to be and that’s the main reason why I hope to be back here to continue this project in a PhD. I would like to thank all the people I collaborated with, especially my supervisor Fulvio Militello and Nick Walkden, and most of all Tom Farley who helped me a lot in every situation and I think is the perfect colleague to work with. I would also like to mention how I enjoyed the time with the Fusion CDT PhD Students, as they were a very good company during days of hard work.

To conclude, a special and final thank you to FuseNet for the support, all this wouldn’t have been possible without your help.