A grand total of five people were supported by FuseNet at the 55th Culham Plasma Physics Summer School, an international event organised by Culham Centre for Fusion Energy! Read all about the experiences of Oleknandr, Lorenzo, Bo, Giorgio and Mirko below.

During the hottest summer ever recorded in UK, I have attended the 55th Culham Plasma Physics Summer School, an international event that is held every year at the CCFE, Culham Centre for Fusion Energy.

The lectures were held in the conference theatre at Culham, dealing with the main aspects of plasma physics and covering both theory and experiment, such as kinetic theory, magnetohydrodynamics, interaction between waves and plasmas, heat transport and all the issues that must be faced in order to achieve energy gain by fusion. The summer school focused mainly on fusion plasmas in toroidal magnetic confinement in tokamaks; nevertheless, the lectures allowed to take an overall view on plasma physics, talking about many applications such as lasers and low temperature plasmas. The lectures about plasmas in astrophysics have been impressive, giving the opportunity to (figuratively!) get in touch with staggering and amazing places in universe, within the context of plasma physics. The school dealt with these topics from the point of view of a physicist, allowing however a connection with engineering and science in general. We had the great opportunity to visit the main facilities of CCFE, JET and MAST, and the lasers in RAL (Rutherford Appleton Laboratory), having a glimpse on the vastness and the complexity of the research on fusion and the applications of plasma physics.

All of this was surrounded by the stay in the wonderful and magnificent city of Oxford, with its stunning history of University, colleges and cultural heritage that reminded of a magic ancient world that has never ended. The school has allowed me to meet several people from all over the world, to share my interests and spend a lot of time all together. Indeed, the summer school allows to have plenty of free time to socialize with other students, to find out their own stories, habits and knowledge. Everyone has a unique story and background, which deserve to be known; this is, in my opinion, one of the main purposes of an international summer school. Every day has been full of new experiences, shared with the other students in a mood of holiday and learning at the same time.

This amazing experience has given me the opportunity of getting in touch with the international aspect of the scientific research, reminding that science is a tool for bringing people together and that cooperation is essential to achieve the greatest results.

I would like to thank FuseNet for supporting me during this exciting and challenging experience, that will certainly be useful for my future.

My name is Oleksandr Burlayenko. I am a master student of Physics and Technology Faculty of V.N. Karazin Kharkiv National University (Kharkiv, Ukraine). I would like to express my gratitude to FuseNet and EUROfusion for financial support to attend “Culham Plasma Physics Summer School” which was held from 16 to 27 July, 2018.

This school is the 55th in the series organized at the Culham Science Centre in Oxfordshire, a leading site for research in plasma physics and controlled nuclear fusion carried out under the auspices of EUROfusion and the UK Atomic Energy Authority. The aim of the Summer School is to provide an introduction to the fundamental principles of plasma physics, together with a broad understanding of its fields of application. Lecturers were drawn from the Culham Centre for Fusion Energy (CCFE) and the Rutherford Appleton Laboratory (RAL) together with leading European universities. All are renowned experts in their fields.

Beside the lectures, many excursions were organized. The students of the school were able to see: Joint European Torus (JET) and Mega Ampere Spherical Tokamak (MAST). JET is the world's largest magnetic plasma retention experiment. It is based on the design of tokamaks and is a direct precursor to ITER, which should start its activity in about 2025. JET runs only during some seconds at the time and thereafter it must rest about 20min before a new run. In a good operative day, about 20 runs are carried out. These runs are made to obtain experimental data and no electricity is produced. However, a lot of energy is required (about a 1% of the total energy used at a given moment in the UK). This is why a direct phone line from London to the JET control room can ring at any moment, kindly requesting to stop experiments. At Culham there are two identical JET tokamaks. But only one is real. The other is a 1:1 replica for training staff, tours or even TV shows.

One of the main benefits of the summer school is the exchanges between the students themselves. To facilitate this, it was organized a poster session. The main objective is to enable students who are working in related areas to meet for discussions. Using this opportunity, I also presented my poster about my bachelor thesis.

Thanks to the FuseNet & EUROfusion support and “Culham Plasma Physics Summer School” I increased my knowledge and gained a real-world experience in plasma physics. 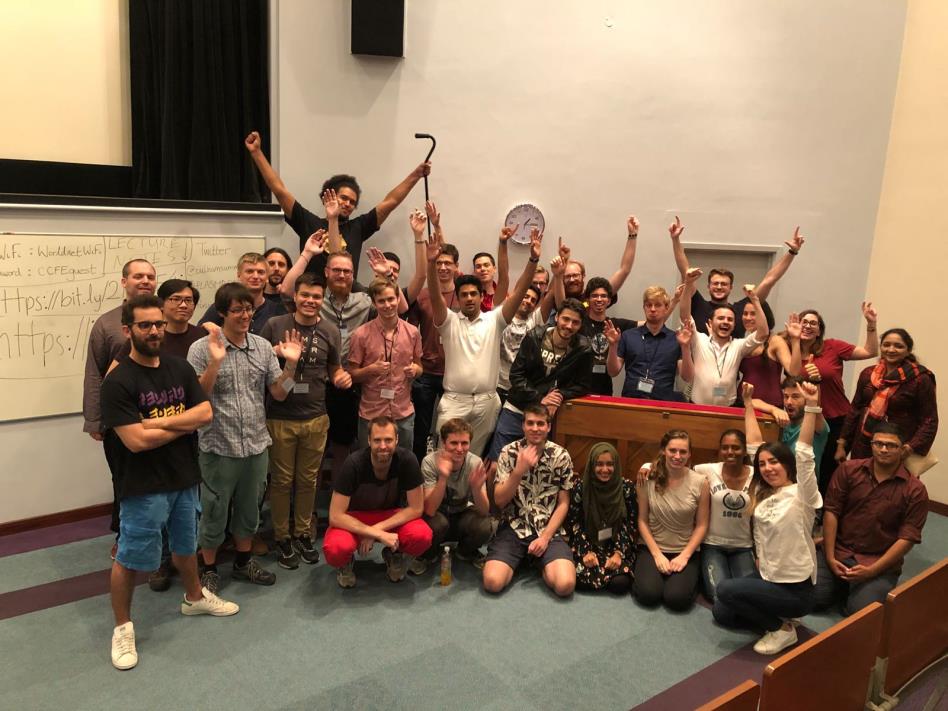 Two weeks and a lifetime of memories, friends and a great start for a future in plasma physics. 40 students from 23 different nations met for the final two weeks of July 2018 in Oxford to increase their knowledge of plasma physics and its applications or as a first introduction to the field. The Culham Summer School 2018 took place at the Culham Science Centre in Oxford. The invited speakers included some of the best in the field.

It was truly inspiring listening to them lecture about their field of expertise. The first week began with an introduction to single particle motion and magnetohydrodynamics, two fundamental topics of plasma physics necessary to understand the remaining lectures. The lectures then followed exploring many of the different areas of plasma physics, including magnetic and inertial confinement fusion, laser plasma physics and astrophysical plasmas. A week after the summer school and my head is still buzzing.

Project manager Andrew Wise greeted us all upon arrival at the William Miller Building and made sure everything went as it should during the two weeks. Having Andrew lead us for the two weeks was a treat; one would have to look a long time for such a warm and kind person. Thank you for two great weeks, Andrew!

After dinner the first night, we had been introduced to each other and new friendships had quickly formed. Most of us were living in accommodation in Oxford provided by the organizers of the summer school. This meant that we were all living close to each other (some were just right down the hall), which lead to us easily hosting social events after the lectures. This included playing football, walking around and seeing the city of Oxford and going for dinner and drinks.

All of the attendees were amazing people. A shame that it could only last two weeks. However, with our great introduction to the world of plasma physics from these two weeks at the Culham Science Centre, I am sure that I will see most of you again at future plasma physics related events.

It took me a couple of days before I was actually able to write anything about this experience.  The sense of emptiness that pervaded me after summer school had ended is still there, albeit weakened. First of all, I want to talk about an aspect which should be of interest for most of the people reading this report: the intense two-week lecture sessions that took place at the CCFE (Culham Centre for Fusion Energy). We had the opportunity to meet, talk and ask questions to professors, researchers and experts in the field of Fusion Energy and related technologies. It was a great pleasure and an honour to exchange ideas, receive advice from these people and sometimes discuss their careers and experiences. My appreciation also goes to the organised tours of the JET and MAST experiments, places where almost all the physics and engineering students dealing with fusion would like to work.

It's not simple to summarise such an experience in just a few lines. There are many other things to say but time isn't on our side. I advise you to apply to this summer school, even though your background isn't focused on plasma physics. You'll find out that this won't be an obstacle, but a chance to appreciate the importance of fusion research for a better future.

Probably I could end my report here, but I feel the need to explain another important aspect of this summer school; the people I've met there. As a shy guy, I would have never thought to be able to build such strong friendships as I did in Culham. I had the opportunity to meet extraordinary people from all over the world, thanks to whom I discovered the habits and traditions of several cultures. I hope our paths will cross again in future, maybe working together to lead the world towards a better, sustainable future through fusion.

Thanks to everybody for the amazing time we had together. I'll never forget it.

Hi, I’m Mirko, a Italian guy doing first year of Master and this summer I attended the 55th Culham Plasma Physic Summer School organized at the Culham Science Center. The school happened from 16th to 27th of July inprestigious science center of Culham, JET’s location and near Oxford. The attendees were all young students and researches from all over the world. The first week of lecture focused on theoretical instrument of plasma physics and instability in Tokamak geometry. The second week, on the other hand, was mostly dedicated to plasma applications both in fusion and industrial sector. During this week, we visited JET, the world’s largest operational tokamak.

The tour at JET was very interesting experience for me. In Culham there are two identical JET’s chambers: one is used to real fusion experiment and it is inaccessible because it is surrounded by many gauge and system of heating, one is used for tv show and training of robot’s operator. Using the second chamber we could observe carefully the inner of chamber. Furthermore, we visited MAST, little tokamak in Culham and Rutherford Appleton Laboratory (RAL) in Harwell.

I believe that this experience was very educational for me because it allowed me to meet many young researchers from all over the world, understand the problems about operation of fusion reactor and, at the end, I’m excited to continue this path.